day 1
after a good flight with bad food we came to Canada where a bus waited for us to drive us to  Fairmont Le Chateau Frontenac where we shut live they next days
the hotel was awesome and there was a pool and a fitness centre. 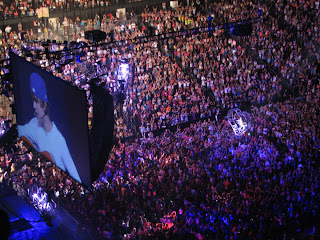 Today is the day! The Justin bieber concert is coming up.

We drove 16 miles from the hotel, to the park were the concert later would be performed.
There were a massive line infront of the park! Young girls were screaming as loud as they could ''Justin Bieber! Justin Bieber!''

There were tent's and bagpackers everywere.

We finally got in! My brother went to get banners and a T-shirt. I was so scared that he would be lost, before he got to the shop.

Justin arrived at the scene. Everybody was screaming.

His voice was incredible! Better than the videos on yotube!

Facts about Canada we were told:


Canada is the second largest country in the world (after russia) Canada have 10 million square kilometers
Canadas neighbours is USA and Greenland they have a coastline which is 244.000 km
Canada is a land in North America
in canada they have two languages. they have French and English in Canada they speak English in every state unless one were they talk french.
Quebec. The state where they talk french, Quebec is nearly 3 time bigger than Texas, Quebec are bigger than Alaska, which is the biggest state in USA. Quebec have a big interest in fishing many have a job where they work with fish. in Quebec they have a plan about how they will make their own power with economic development from the canadian shield.
In Canada they really like hockey and Football (american Football): Canadian football league the biggest team in the league is Montreal and Quebec. In Canada they also play soccer, the team plays in the Major League Which is the league in USA. The biggest team in soccer ist Montreal, they came in third place last year with a very weak squad.
Plant life in Canada varies with land type and climate.

Canada Day
Canada Day is the national day. falls on the 1 july it was that day Canada became a country

In 1867 four of Great Britain’s North American colonies joined together as a new country. It was called the Dominion of Canada. In 1879 a law made 1 July a holiday called Dominion Day. Canada gained complete independence from Great Britain in 1982. In the same year Canada changed the holiday’s name to Canada Day.

Canada’s history has produced a culture that, in its broadest sense, is a mixture of British, French, and American influences.


Canada has rich fishing grounds off both the Atlantic and the Pacific coasts.

this is about our cool trip to Canada